Guilders - A Life In Shadows

Guilders – A Life In Shadows is a tabletop roleplaying miniatures game, about thief guilds played with 28mm-32mm scale miniatures. You play as the Master of a Guild made from all manner of thieves, thugs, scallywags, and troublemakers. The goal of your guild is to rise in power, fame and wealth – make your name and rival the old and powerful guilds.

This page will contain everything. Terrain projects, miniatures, articles etc. But first a few links.

The current rules, tokens: Google Drive
Facebook group: For anything about the game.

Guilds
Other Miniatures
Terrain:
I've made a lot of terrain for Guilders. Go to this page for all the projects gathered in one place.
Youtube:
There's a bunch of Guilders stuff posted on Youtube.
Battle Reports:
A Hanged Man's Friend - rescueing a captured guild member
Pious Pickpockets - first campaign test game.
Hanged Man's Friend - trying to rescue an acrobat from the gallows.
Red Cobblestone - An attacker / defender heist.
Solo Campaign: 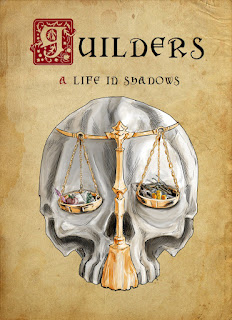